Isn’t it awkward when you’re in the midst of a zombie apocalypse, and someone thinks this is an appropriate Halloween costume? 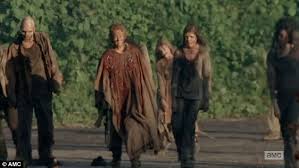 I mean, come on, Carol; ever heard the phrase ‘too soon’?

Yup, it’s Season 5 of The Walking Dead; Carol’s back on the scene and as cheerfully homicidal as ever. In case her daring solo mission to save the gang led us to any false conclusions, she wasted no time in kneecapping a middle aged lady with a semi-automatic and feeding her to the undead. It was totally, like, justified though, because this chick would kill anybody who posed a threat to the survival of her group… completely the opposite of everything Carol believes in. Obviously. Duh.

Speaking of awkward – don’t you just hate it when you turn someone out of your community to fend for themselves in a monster-ridden nightmare world, then they inconsiderately show up again and save you from certain death? Oh, and hand you that baby you thought had been eaten by zombies, that they have been busting ass to care for while fighting for their own survival. (Props to Tyrees as well, of course. Nice job, guys. One out of three ain’t bad.) Nice save with the awkward hello though Rick, it’s probably all water under the bridge now. But relax, it’s not like Carol’s, y’know, a child murderer or anything.

It was an intense episode all round – spattered with arterial spray, with a sprinkling of unexplained body parts and some creepy walkie-talkie chat. And if that’s not enough excitement for you, there’s an explosion thrown in for good measure. If you thought plain ol’ zombies were exciting, wait ’til you try FLAMING ZOMBIES. That had to be the name of somebody’s band in college. Surely.

We collectively held our breath as the first scenes found some favourite cast members hog tied and readied for execution. Fortunately, deranged butcher gangs traditionally murder their captives in order of narrative importance, from lowest to highest. They used to also pause and explain their entire evil plan at length before commencing the killing spree, but this is being phased out after a spate of conveniently timed interruptions.

Speaking of interruptions – what was that? Is someone watching Transformers next door, or what that a big ass explosion? Better leave these prisoners to their own devices momentarily while we discuss among ourselves what to do next…Yeah, turns out Rick’s still got it in the ‘kill a motherfucker’ department.

So while Terminus almost proved terminal for Rick and co. (see what I did there? Man,I am awesome at puns…)the bad guys were soon on fire, and the good guys were back in the (only semi-metaphorical) woods. Again. I’ve not actually been to Georgia, but thanks to TWD I imagine it’s just one giant forest with Atlanta plopped in the middle.

But,don’t worry folks, the fat guy with the mullet has all the answers. Roll on Season 5.